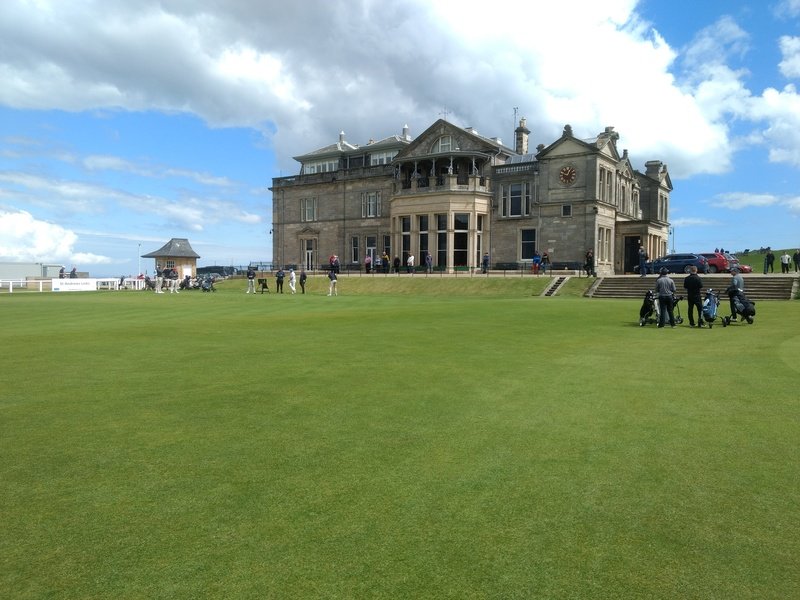 This week we are at the "Home of Golf", St Andrews. We came here in 2015 and I must say it is nice to be back. My grandad is here with us too so it's quite a special week for me. 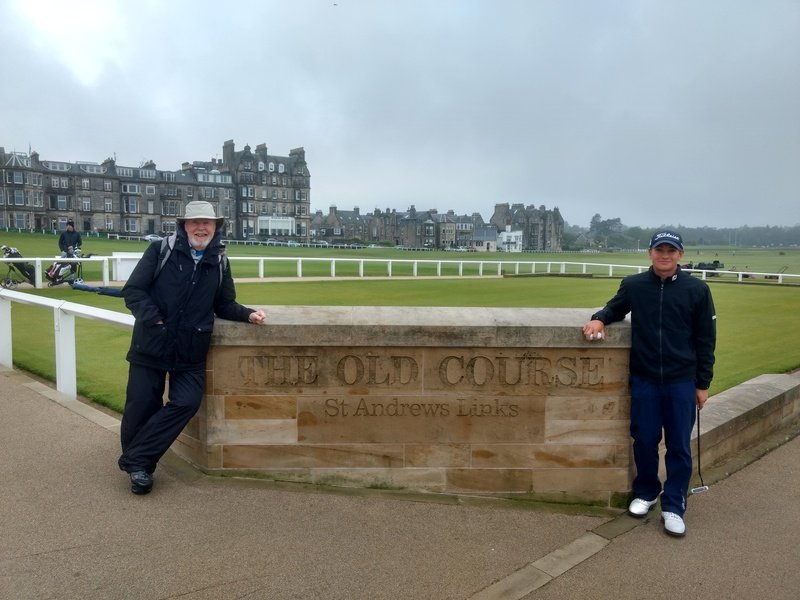 With Grandad enjoying the sunshine... 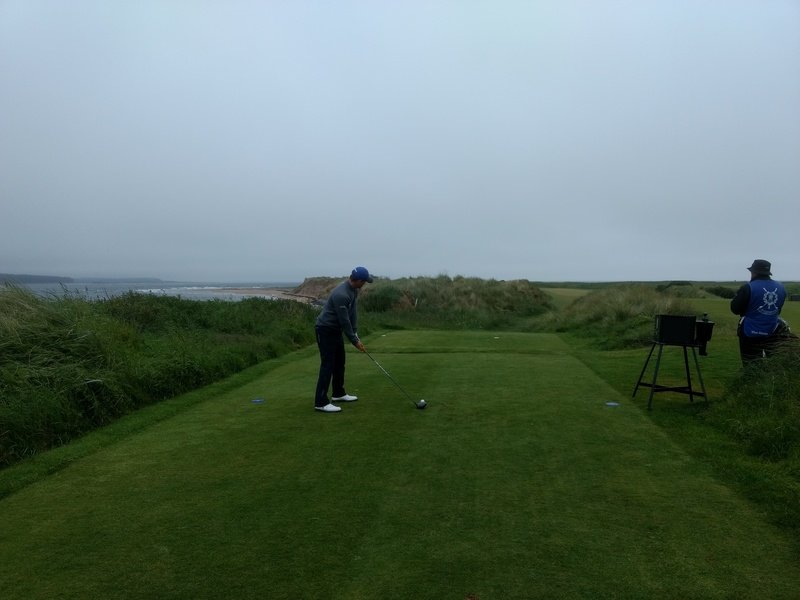 I played the first of my two practice rounds today on the Jubilee course today. It was a bit windy and quite cold, although one of the locals described the wind as a gentle breeze. The course was good, some tough holes - a lot depends upon which way the wind is blowing - but I liked it a lot. It isn't very long but the greens are small with plenty of bunkers to gather any off target approach shots. The real difficulty is keeping the ball under control with the wind - which can change during the round. I think my favourite hole is number 8 which is at the far end of the course. The view is just amazing. Off the tee you can see the sea on the left, then some dunes, then a tiny bit of fairway and on the right some more dunes. Fantastic!

Tomorrow I play a practice round on the Old Course - it should be good fun!

I played the Old Course today. It was a really calm day which is quite unusual at St Andrews. I hit the ball better today than I did yesterday on the Jubilee course, so that's a step in the right direction and certainly left me feeling more confident.

Old Course - back nine - stunning views over the estuary

It's an amazing experience to play the Old Course. When you walk around the course and play it you remember all those famous shots by champions such as Seve, Jack Nicklaus, Arnold Palmer, Gary Player or any of the other fantastic players who have play the Open here. The course is interesting, but it isn't easy even though the fairways can be quite wide - at least one green is 99 yards from front to back! The finish is can be very difficult, if you are playing into the wind holes 14 through 17 are really tough.

I start the tournament tomorrow at 14h00 on the Jubilee course. Let's go!!

First round on the Jubilee Course I played well on the front nine (-3) where I eagled the 6th and birdied the 7th. All was nicely under control.

The back nine was much more difficult, it was lot more windy, cooler and the level of my play dropped a bit. I three putted on 13 and 17 which undid some of my good work on the front nine. I finished with a par on 18 for a round of 71 (-1). I have some work to do tomorrow on the Old Course if I'm going to make the cut. I'm really looking forward to playing my first round of competitive golf on this lovely course - it should be fun.

I started at 9:50 today on the Old Course - oh what a joy it is to play on the Old Course! I got off to to really hot start with 3 birdies on 1,2 and 3. Things settled down for a bit with steady pars until the par 3 8th. I three putted for bogey but bounced back on 9 with a birdie. More pars followed until I birdied the 15th after a superb approach shot to 60cm. I made par on the last three holes, signing for 68 (-4) which makes -5 for the tournament.

I was a bit unlucky with the draw. Yesterday it was pretty windy for those of us who played in the afternoon and today we had some wind mid-morning whereas the other half of the draw have played both rounds in very calm conditions. That's the way it sometimes goes in links golf so I'm pleased with my scores and it looks like I might make the cut. Let's hope so!

Last day of the tournament, two rounds on the old course with the pins in the traditional positions for the last day of the Open; this was always going to be an interesting day.

The day didn't start quite as I wanted with my second shot finished in Swilcan burn. I dropped a shot making bogey on the first hole. I played pretty well from there on, I created a few chances for birdie, the putts rolled by but at least I had some opportunities to score. After seven straight pars I birdied number 9 thanks to a good wedge shot and an even better putt. 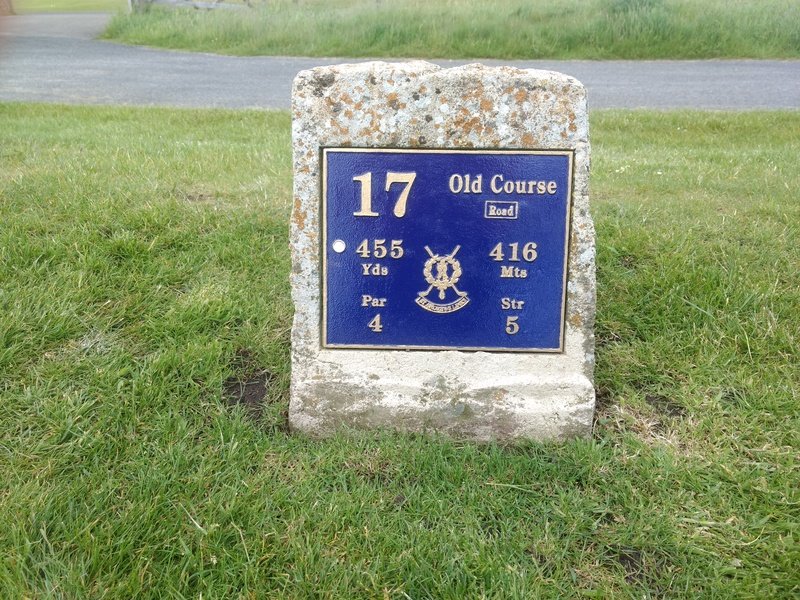 The infamous Road Hole on the Old Course

The back nine is harder than the front on the Old Course and I was working hard to keep my card free of further bogeys. I made some really good putts to save par but eventually my luck ran out on the 17th, all golfers know this one as the infamous road hole. My tee shot set off on the the intended line but was caught by the wind as it passed the hotel which sent it it off to the right and into the rough. I wanted (was trying to) avoid the road hole bunker by playing to the front of the green being prepared to accept a bogey as the price for playing from the rough. The club face closed as the hosel snagged on the tallish grass and my ball went into the bunker. 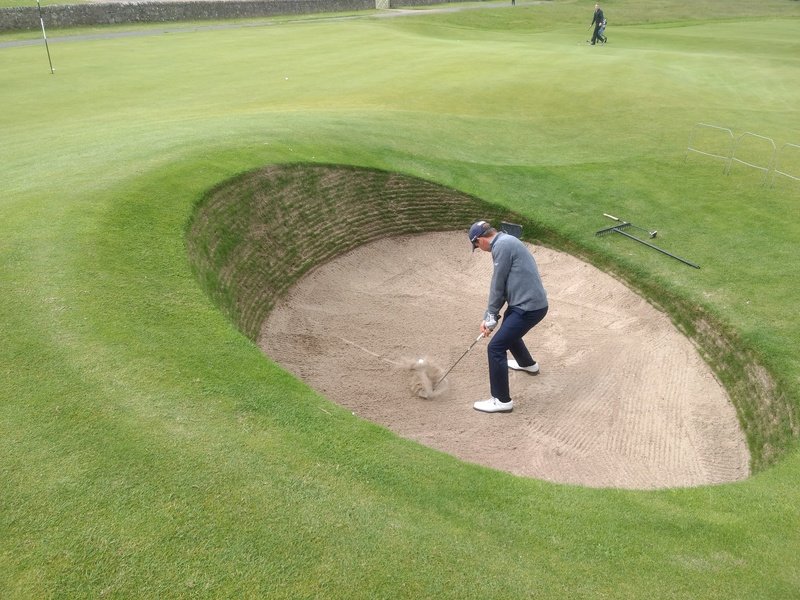 The Road hole bunker (photo taken during the practise round)

I didn't have a lot of room to get the ball up and over the lip; I couldn't play out the the right as I had no stance because the ball was too close to the face; exiting to the left would leave me with a very tricky chip and putt. I decided to give it a go at getting it out onto the green but the ball hit the face and rolled back into the sand. Fortunately I then had more room to get the thing onto the green which I managed to do but it wasn't close enough to get the first putt in. A double bogey on one of the hardest par 4s in golf.

I was a bit disappointed to play 2 over but what can you do?

After a very good lunch in the Links Clubhouse round 4 started much better than my start in the morning. I birdied the 5th after opening with pars. I reached the green in two and two putted for a birdie. My playing partner was blazing a trail of birdies and I managed to hang on in his wake and birdie 7 and 9 after hitting a couple of wedges close. The back started well, paring 10 through 13 but then suffered a bit of a bad patch. I pushed my drive out of bounds on 14 and could only manage a double bogey and hit a terrible iron shot on 15 which lead to a bogey. Closed out the round without incident for 72 (level par) and a score of 285 (-3) for the tournament.

Overall it was a great experience to play with some really very good players - the winning score was -20! The two courses were excellent I really enjoyed the Jubilee course and there's not much I can say about the Old Course that hasn't been said already. It is a very special course not only for the history but also it's a very good test of golf which requires a good deal of course management and an excellent short game to make a good score.