The "Interclub du Lot et Garonne" is a team championship between all the clubs located in the departement. The competition is played over 2 days with the winner being crowned the departement champion. The first day is a strokeplay qualification. All six members of the team play and the top 5 scores count. In order to have a chance of winning you must qualify in the top 2 to get into the championship match. Day 2 is matchplay. The number 1 and 2 seeds play each other for the title while the number 3 and 4 seeds play for 3rd place.

The Championship rotates on the different courses located in the Lot et Garonne and this year it is in Casteljaloux. The course was built in 1989 and designed by Michel Gayon. The course runs through the Landes forest but also out in the open where the fairways are bordered with high penalizing rough. It is a pretty course which features nice views of the Clarens Lake nearby. In terms of the challenge, the course requires precision but it is relatively short meaning scoring opportunities are frequent.

The favorites to win were Casteljaloux. They were playing on home soil and their team has improved a lot recently with new players joining the club. The competition was played in a really good spirit and the course was in fantastic shape. 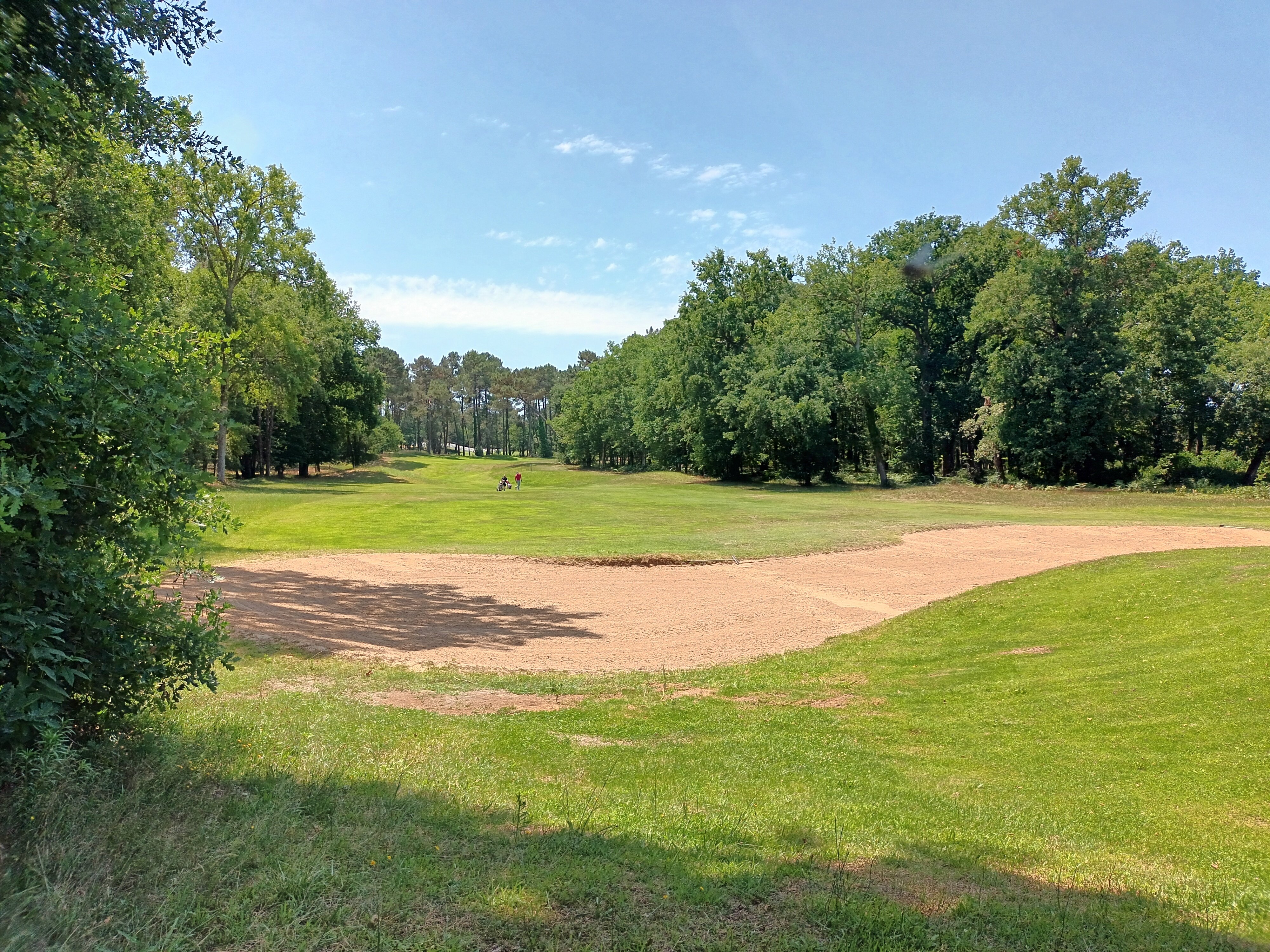 In my stroke-play round, I thought I played some solid golf. I teed off quite early so on the first few holes the ball was not flying quite as far as usual because of the cool air but the positive thing was that the greens were perfect.

I started quite steadily with three pars but unfortunately dropped a shot on the 4th hole after my approach to the green finished up close to the lip of the bunker. From there I was unable to get the ball onto the green which made making a par a difficult task. I then made a couple of pars before making consecutive birdies on holes 7 and 8. Both those holes are good scoring opportunities so I was happy to make the most out of them. I tried to be aggressive with my tee shot on the par 4 7th and manage to get the ball within a few steps from the green. I then 2 putt for birdie to bring my score back to even. On the following hole, a par 5, I found the putting surface in two shots and made a birdie once more. After a par on the par 3 9th, I was out in 1 under. I started the back nine well with a birdie however this one was not as straightforward as the previous two. I missed my tee shot right and the ball finished under a tree next to the neighboring hole. Luckily the hole is a dog leg right so the positive was that I made the hole shorter, however, the overhanging branches were going to cause a little bit of a problem. I chose to hit the ball through a small gap in between the branches. The ball flew perfectly at the target, setting off low and then rising with the spin. The shot was fantastic and the ball finished 2 meters away from the hole. I followed the shot by rolling the putt in to move to 2 under par. That sequence of shots was the highlight of my day.

After such excitement, the following holes were not quite as fun. I made pars on 11, 12, bogeyed 13, and made pars on 14 and 15. This run was a little bit disappointing since these holes are good scoring holes but never mind in golf you sometimes miss your chances. With 3 holes to go and a score of 1 under I really wanted to finish strong for my team. I felt like I was playing pretty well so I went for it. The putts finally started to drop and my wedge play was good. I birdied holes 16 and 17 to move to 3 under and finished with a par on 18 to sign for 69.

I was really pleased with the way I played but most importantly with my mental state. I mentioned in previous articles that I had noticed a drop in performance in that sector of my game and that I was going to take the necessary steps to improve. I felt like there was a big difference in my attitude and my approach to the game. I was a lot more focused on my shot-making and my decisions rather than the score. I played with a lot of confidence and freeness.

The team qualified 4th and so we played Marmande in the 3rd place match. In matchplay, we did well. After losing the doubles point we managed to win all the other singles matches. I played in the singles match number 1 and won 3&4. I played well and had the same sense of freeness as on day one which was good. Over the 15 holes I played, I made 4 birdies and was in control of what I was doing. All of this is good for the upcoming tournaments.

Lastly congratulations to Casteljaloux on the win. They were the best team and outperformed everyone.