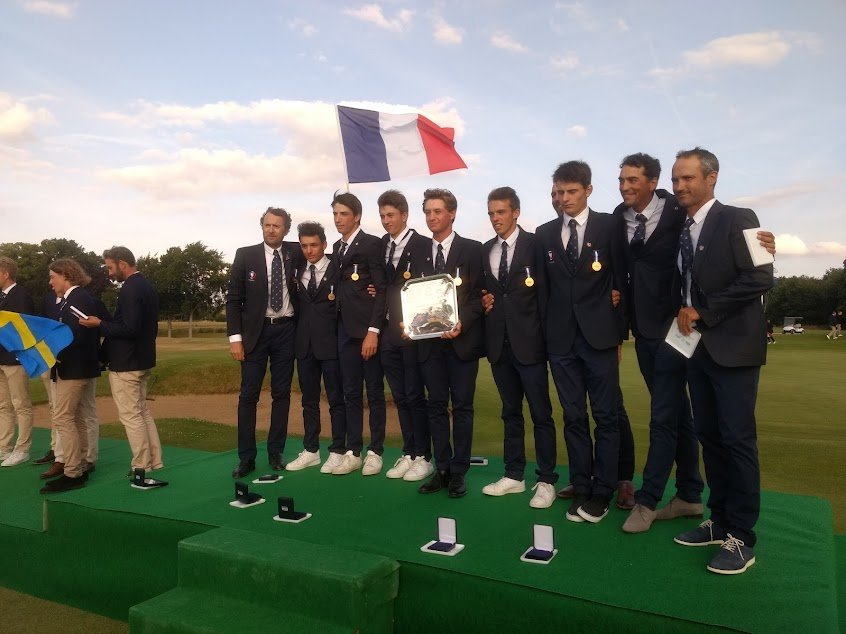 Golf is an individual sport so every time you get to play as a team it’s really special. The European Boys’ Team Championship is probably one of the most fun events to play in - especially if things go well...!

Preparation for the event started long before the first day of stroke play. Before this week we played matches against other nations in Chantilly to get used to playing the course. We also got together two weeks before the championship on a training camp which allowed us to get ready for the tournament, for example, we tried some doubles pairings out and developed a good team spirit.

The championship is played over five days. The first two days are individual stroke play. The five best scores of each team from both rounds are totalled in order to rank the teams from 1 to 16. The top eight teams then battle it out in a match play for the title and the last eight teams play to stay in division 1 (with the last two relegated to Div 2). The match play phase for the top 8 qualifiers was best of 7 matches (a point for each match won): two foursomes in the morning followed by five singles in the afternoon, with the match concluding as soon as one team won 4 points.

We didn’t really play our best in the stroke play phase of the competition - there's no doubt as a team we under-performed with the exception of a couple of players who thankfully played well. We only just qualified in the top half of the table (8th or last spot) so had to play the highest qualifiers and the by definition the team in form: Spain.

At least we were in the top half of the draw so we had a chance of winning something.

It may be a surprise to some but we were actually quite happy to be playing Spain who won the qualification phase. We figured that to be European Champions we would have to beat them at some point anyway, so why not straight away in the quarter finals? Everybody was super motivated - and when I say super motivated I can honestly say I've never seen a group so determined and ready. We played really well and we did it! We beat the top team and reigning champions and we were ahead the whole match all day long. It was a great result a fantastic performance by the team. 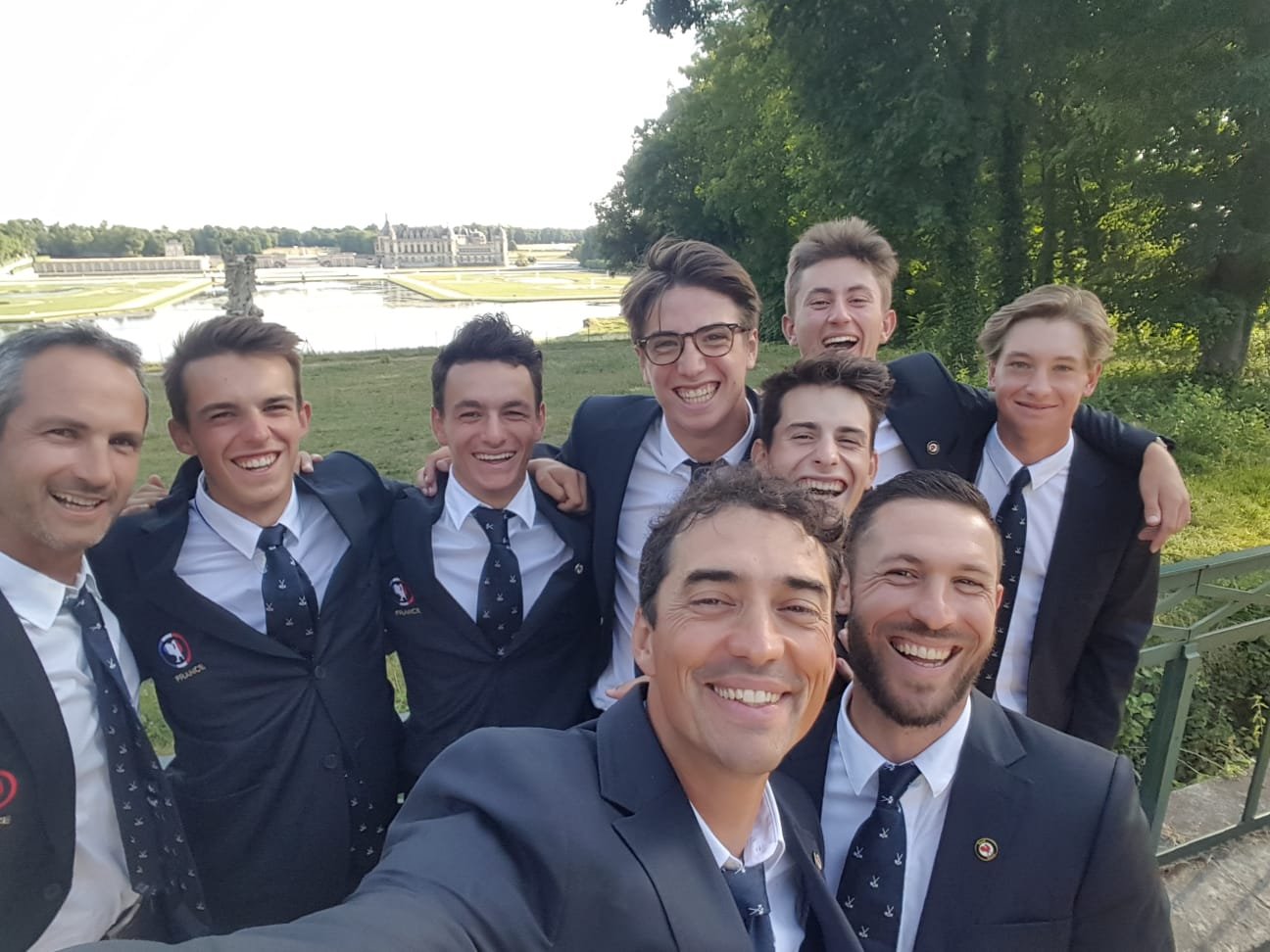 Group selfie with the Chateau de Chantilly in the background. (François Dubrule the Captain is missing)

In the semi finals the following day we played Sweden. The game plan against the Sweden was pretty much the same as against Spain. Again the staff did a great job, everybody was super-motivated, ready to play and ready to win. Against Sweden it felt like déja vu we were ahead in nearly every match. Everybody played really solid and didn’t make many mistakes. We managed to beat them and made it to the final.

We were all very excited to play the final. The night before it was lights out early, no screens after 9pm - everyone followed the rules, nobody wanted to mess this one up! Our opponents, Germany had played well in the stroke play finishing 2nd behind the Spanish - we knew it would be a tough match as clearly they were in form and are one of the top teams in Europe. We thought we could do really well drawing on our experience against Spain and the sheer will to win in the camp - it was so special the ground swell of self belief.

After the morning foursomes the score was 1-1. We were disappointed not to be leading by 2 after the morning like on the other days but the fact that we had lost one match made us realize how much we needed to stay focused and up our game in the afternoon to win. They weren't going to give up the trophy without putting up a fight.

In the afternoon everybody started their match well with most of us leading after 5 holes. We were in control of the match and keeping them under pressure. Once in the lead it's the other guy that has to do something special, take a risk to win the hole. Slowly the holes were running out and we were getting closer and closer to the trophy we all of wanted to win. Tom brought the first point to the team in the afternoon to make it 2-1. A few minutes later Nico won his match to make it 3-1 and now we only needed one point.

I was caddying for Nathan, we've known each other for a long time. We first played together on the same team in 2013 for Aquitaine and have been good friends ever since. Nathan was 3up with 3 to play. He hit the green off the tee on the par 3 16th, then rolled the 5 metre putt to about 3 cm, the German player took his hat off and congratulated Nathan and that was it, we were European Champions! The celebrations started, the feeling was incredible, just amazing! 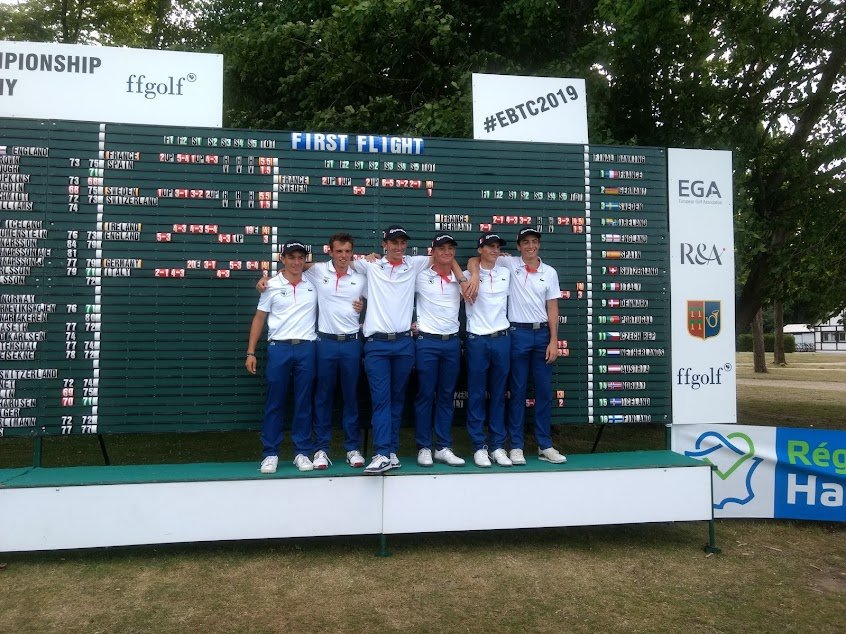 To some people our win may have come as a surprise especially after our result in the stroke play. To us it was no surprise. We had been preparing hard for this week. We had been saying for nearly three months that we were going to win. At the beginning we were just saying it and laughing because we felt silly about saying it at first, but by the time we got to the tournament everybody in the team was convinced that we were here to win. I feel like the staff and our captain played a big role in making us believe that we could do it. For example every morning before the match they would give us a motivational speech and every player was not allowed to leave the hotel until he was convinced that we would win the match. They also managed to build a really strong team by making us do lots of non-golfing activities as a group - paddle boarding for example.

The European boys team championship was such a great experience. Being able to win as a team is such a nice feeling. Everybody tried their best all week, gave it their all and believed that we could do it.

This week ranks as one of the best in my sporting life so far.

Dad has put his photos and videos on-line here.